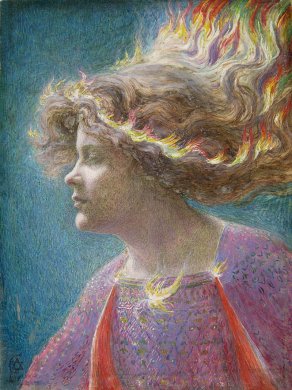 WOMEN AND PASSION: AT THE SOURCES OF SYMBOLISM

"To the worthy visitor [...] the men you see are heros, Hierophants, demi-gods; the women are fairies, princesses, saints. They do nothing servile or common, they think, love, and suffer nobly; their eyes gaze at what yours don’t see, their heart palpitates to a mysterious beat [...], their precious body moves fatefully."

Always seeking something new, the Alexis Bordes Gallery decided to organize an exhibition of Symbolist works for the beginning of the 2011 fall season.

This literary and artistic movement which marked the end of the 19th century with its strong mystical and ideological stamp was also the opportunity for important exchange between European artists. Faced with the anxieties of a troubled and decadent end-of-century, they sought new sources of inspiration, which included a historic or legendary past, religious and mythological beliefs, dreams, and superstitions. At the heart of creation, women’s bodies and souls became the symbol of all their Phantasms.

A catalogue in French presents about twenty works by artists such as: