The Fontana dell’Acqua Paola, also known as the Pauline Fountain, appears under a soft transalpine light. Its construction in 1612 on the Janiculum Hill, considered the eighth hill of Rome, offers an unobstructed view of this sumptuous marble monument which fascinated artists until the 19th century.

The drawing is from the hand of Victor-Jean Nicolle, a terrific draughtsman and engraver who specialized in depicting urban landmarks. Even though his life remains obscure, his large Franco-Italian production makes it possible to understand his career better.

Nicolle discovered Italy during an initial voyage in 1787. Considered since the 16th century as an essential rite of passage for every artist seeking an ideal and fame, the famous “Grand Tour” made it possible to draw directly on site ancient elements that one had already studied during one’s previous training. In Rome, the systematic meeting place for artists, Nicolle perfected his education, especially his drawing techniques and perspective.

Nicolle was mainly inspired by architecture: his compositions are devoted to the glorification of architecture and people who are depicted only serve to enliven the whole.

The artist also developped a major interest in the faithful representation of light as observed while the drawing was being executed. The variable dimensions of his watercolours lead us to think that Nicolle probably sketched his drawings from Nature, directly on site, and finished them in the studio. Certain of his very small sheets of drawings present a great profusion of details.

The generous dimensions of our drawing allowed Nicolle to divide the composition vertically into two parts. The right side is devoted to the sky, whose soft pink and yellow coloring let us imagine the gentle warmth of summer twilight. Our sheet is made precious through the luminous and atmospheric variations in the sky and its color effects on the Fontana dell’Acqua’s white marble which turns pink.

Our landscape is reminiscent of late 18th century and early 19th century Arcadian reveries and vision evoked by the realistic depiction of the architecture and of Nature in which man only occupies a very reduced space. Fascinated by ancient architecture, which was abundant in Rome, the artist made the connection between past and present in his work: this is the nostalgia which Nicolle, like many of his contemporaries, explored. 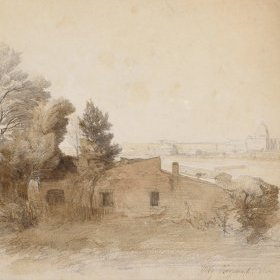