Half-Length Portrait of a Dignitary holding a Pair of Gloves

"A very excellent painter of great and lesser officers...He lived in England for a long time where he made many beautiful and admirable pieces, for the King and many other grand Lords." (1)

Unjustly left out of Art History publications, Cornelius Johnson (Jonson or Janssens) van Ceulen was nonetheless considered an excellent portraitist during his lifetime. His œuvre was rediscovered especially through majestic portraits from British private collections, the country where the artist spent most of his life.

Born in London in 1593 in a Protestant milieu, the young artist, who was trained by the age of 14 years old, demonstrated he was an excellent draughtsman. By developing his qualities as a portraitist, van Ceulen inspired Flemish artists whose presence is attested in England in the 1610s, such as Cornelis Ketel (1548-1716), and frequented the studio of Marcus Gherraerts II (1561/2 – 1636), painter to Queen Anne of Denmark. Sources also indicate the young artist’s presence in Amsterdam in the years around 1615, as well as a return to London in about 1618, a fact which would support the hypothesis of a dual education already apparent in his first portraits.

Largely inspired by the work of Anthony Van Dyck (Antwerp, 1599 – London, 1641) whose popularity would affect him at the beginning, van Ceulen was appreciated for the breath of Nordic preciosity in his works, and he gradually made an enviable place for himself in English high society, culminating in his appointment as court painter to King Charles Ist in 1632. However the civil wars which divided England in the 1640s led the artist and his family to return to the United Provinces. In Middelburg, the heart of trade in the United Provinces in the second half of the century, Johnson joined a community of painters and merchants who had already been established there for a few years. He entered the Guild of Saint Luke where he developed a new network of patrons. In Amsterdam, his loyal English clientele, as well as his local commissions, assured him of a growing reputation : rich merchants and imposing political figures, such as Jan Cornelisz Geelvinck, a famous Burgomaster, clamoured for their portrait from him.

Middelburg, Amsterdam, and finally The Hague… van Ceulen explored many towns before arriving in the Calvinist province of Utrecht in 1652 where he spent the last eighteen years of his life. He received commissions there from elite family members and became one of the best portraitists of the region.

In contrast to his London production where most of the sitters with oval faces are depicted bust length in oval trompe l’œil architecture, the portraits produced in Holland remain more refined. Inspired by Van Dyck, who died in 1641, Ceulen developed new characteristics common to his portraits, in which the sitters are shown in a half-length three-quarter view against a dark background. Probably a rich merchant or patron from Utrecht’s social elite, our sitter poses proudly, one hand placed on his torso, the other delicately holding a pair of leather gloves.

Van Ceulen’s talents as a miniaturist certainly justify the highly studied preciosity of which our picture is an excellent example. The light astutely focuses the viewer’s attention on the sitter’s face by creating a striking contrast between the flesh and the plain peacock blue background, two elements which are almost worth as much as a signature and are used in a few rare known portraits by the artist. The elegance and exacerbated realism are rendered through minute execution of substances, especially in the delicate transparency of waxy flesh with apparent veins, a detail common to portraits of this period which are considered the most subtle of his production.

Cornelius Johnson van Ceulen’s career falls into two distinct productions, of which the Dutch part stands out for finesse in execution raised to its most exacting level. Extolled by the engraver Jan Meyssens (1612-1670) in his work, Images de divers homes d’esprit sublime qui par leur art et science devraient vivre eternellement et desquels la louange et renommée faict estonner le monde (1649) (2), collected by the social elite from London to Utrecht throughout the 17th century, and conserved today in international museums such as the Utrecht Centraal Museum and the Tate Modern in London, van Ceulen’s work has regained its place of honor as a result of the recent work on him which appeared in 2015.

(1)Karen Hearn, Cornelis Johnson, Paul Holberton Pub., London, 2015, p. 57. (2) Translator’s note : published in English in 1694 under the title, The True Effigies of the most Eminent Painters, and other famous artists that have flourished in Europe. 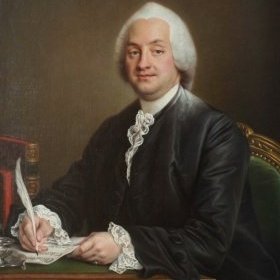