The Belgian painter Jean-François Portaels (Vilvoorde, 1818 – Brussels, 1895) counted Hungary as one of his favorite countries to visit among his many voyages, on account of the exotic and picturesque qualities which he found in the very heart of Europe. He stayed there in 1860 and 1865. A few letters, various notes in his sketchbooks, as well as several drawings and pictures furnish information on this country’s attractions which intrigued and fascinated him at the same time. First of all were the encampments and lifestyle of Bohemians scattered across the Hungarian Great Plain, Grand Alföld, which could be the subject of a study in itself, and then the Temesvar (Timisoara, Romania) Theatre, Budapest’s music and opera – a city in which he was appointed corresponding member of the Academy of Fine Arts, and finally the traditional Hungarian costumes.

Portaels’ passion for regional costumes discovered during travels through Switzerland, Italy, the Middle East, Spain, and Morocco, as well as Brittany and Holland, is well known. Everywhere he travelled, he drew, and sometimes purchased, traditional clothes and jewellery, and it was not unusual for him to talk about it in his correspondence. Hungary, especially the region of Transvylvania which today is split between Hungary and Romania, is known for the wealth and variety of its regional costumes, of which certain aspects evoke the Ottoman world which had a common border with this region for centuries.

We know from his correspondence that Portaels took two trips to Hungary. The first in September 1860, in the company of Jules Devaux (Bruges, 1828 – Axenstein, Switzerland, 1886), who was his friend and the advisee of the young Duke of Brabant, future King Leopold II. As soon as they arrived in Hungary on Saturday, September 22nd, Portaels wrote to his parents-in-law, the painter François-Joseph Navez and his wife Flore de Lathuy, “Here I am in Hungary in the midst of a pastoral people. The country seems like it is only an immense pasture covered with beautiful herds of horses, cattle, sheep.” After having been welcomed by the owner “of a pousta, as the farms or cultivated land are called,” the painter and his travel companion went to Kecskemet, “a real farmers’ town, with wide but unpaved streets.” In the same letter, he explained that he was going to Gratz (Graz, Austria) to honor a very important date with “the august person.” He remained discrete about the identity of the latter, as it was quite probably Prince Augustus of Saxony-Coburg-Gotha (Vienna, 1818 – Ebenthal, 1881). He specified in his letter ‘that this business stays between us, there is already enough jealousy among my dear colleagues.” It was certainly on account of Jules Devaux that Portaels was accorded this princely encounter, “which went very well, but I should do the subjects that are indicated to me and are related to local customs. It will be interesting to do. I am very satisfied.”

From Graz, the two friends continued their trip to Pragerhof (Pragersko, Slovenia,) across Esclavonia (Slovenia), to arrive in Kanitza (Nagykaniza, Hungary), on September 27th, as he wrote to his mother, “If the local color is interesting, it must be admitted that it is really dirty here and the little beasts of my acquaintance paid me such a friendly visit last night that I couldn’t sleep. I got up in the middle of a magnificent storm to organize my sketches a bit. We are only ten leagues from Lake Balaton.” He ended his letter like a trip by writing, “Rarely have I felt better (…) Here, I see Nature and have the good fortune of watching it. These customs which I don’t know, these new manners and styles, this Hungarian people about whom I have read so much, and then a certain primitive air, everything interests me, and I did an ample harvest in sketches.” Less than a year later, in February 1861, Portaels visited King William III of Orange-Nassau in the Netherlands, who had requested through the intermediary of Henri Dumonceau, that Portaels “bring along the works he had brought back from Hungary".

After five years, in October 1865, Portaels left again for Hungary, this time with The History of Hungary in his baggage. During this new journey, he was more interested in the inhabitants and their costumes. He rapidly wrote a few words in a sketchbook, “The peasants in their great coats cut a fine figure... What can be said of the Bohemians ...a strange and bizarre race but superb under its rags, and the Jews of Pesth.”

Back in Pest, he wrote to the Navez couple, “This city has become really very beautiful and has gained a lot since my last voyage.” After going through Szégédin, where the streets are “only real cesspools,” he takes advantage of strolls in the countryside to seek out local rural life. “The peasants are superb. How well they are built, one would say they are really self-confident. And then the beautiful livestock, the cattle rival those of Rome.” Portaels was especially fascinated by the Bohemian encampments, “One could spend days watching these strange creatures, living as nomads (...). They are happy, witty, very abstemious, they live with little. They have the air of Arabs,” and he adds in his letter to his friend, the Count of Villermont, “I am fascinated by the Bohemian women whom I was able to see up close and study in their encampments. They are real nomads, thieves, dirty and splendid. They have a mysterious side which makes you stop and think.”

The picture, undated, presents an idealized portrait of a young Hungarian woman who emanates distinguished charm and a certain gracefulness. Her hands crossed, she is seen standing three-quarter length and looks at the viewer with a light good natured smile. Behind her stretches a vast flat landscape that dissolves on the horizon in a strip of blue sky characteristic of the Hungarian Great Plain which struck Portaels so much. In a letter, he evokes these “arid plains flat as if a roller had passed from one end of the horizon to the other.”

The sitter does not wear the typical traditional costume of a given region in Hungary, but outfits composed pieces of clothing which the artist took pleasure in combining and harmonizing, based on various drawings sketched from life during his travels, as was his habit. The young woman is dressed in a white linen blouse with wide sleeves garnished with rich floral embroidery in golden threads, closed at the base of the neck by an embroidered trim on which is set a two-strand necklace of silver piastres. She also wears a long sheepskin vest embroidered with a black and gold zigzag pattern along the edge, and a bodice colored with yellow and green floral motifs, over a long red skirt. On her head, a satin scarf embellished with gold stripes is knotted around her hair braided with ribbons, ear-drops, and piastres.

In his pictures, Portaels liked to depict a refined and elegant type of feminine beauty which he had encountered in the Orient, as in Hungary, and which his biographer Edmond-Louis de Taye so appropriately named “feminine fantasies.” For this reason, we entitle this magnificent portrait of a young woman, “Hungarian Fantasy,” and date the work to about 1865.

This work will be integrated into the artist’s catalogue raisonné being prepared by this entry’s authors. 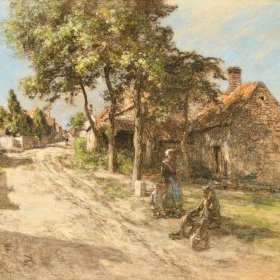 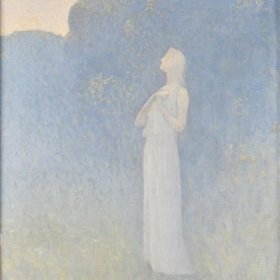 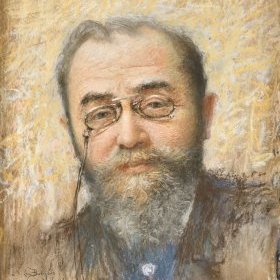 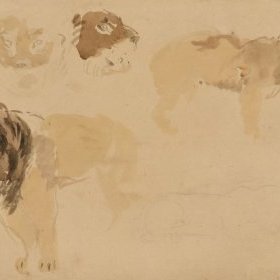