Portrait assumed to be Charlotte Paulmier de la Bucaille, Marchioness of Cany, as a Spring

In 1741, the Swedish Ambassador to France, Carl Gustaf Tessin, connoisseur and collector, emphasized how it had become difficult to obtain a portrait from Nattier, because the master was so solicited by women. During this time, in fact, the portraitist’s inimitable style intended to sublime his female sitters was forged with its repertory of poses, head positions, and mythological travesties. Nattier’s art now stood out from those of other stylish “gallant” portraitists on account of his chromatic range associating blue, pearl grey, green, and pink, as well as by his practice of applying pigment with a feather light touch which conferred a somewhat blurred aspect to flesh that also helped to accentuate volumes. Even as he retained a reasonable likeness, he used his brush skillfully to compose a graceful touching effigy of each lady while avoiding all ostentation or solemnity.

The theme of springs first appears in the large ambitious Portrait of Marie-Anne de Bourbon, called Mademoiselle de Clermont, at the Mineral Waters of Chantilly, painted in 1729. As goddess of the Waters of Health, the daughter of Louis III de Condé and of Mademoiselle de Nantes is depicted full-length, seated on a rock and leaning against an emblematic urn from which flows a clear stream. She is clothed in light scanty attire whose pearl grey tints contrast advantageously with drapery’s luminous blue. The lady is accompanied by a nymph and a small Cupid who holds Aesculapius’ serpent and a rudder. In the background, the pavilion of the mineral water fountain built in about 1725 can be recognized in the part of the park situated near the road leading from Chantilly to Creil.

The many later variations on this theme of the spring adopt a smaller format - the characteristic large centered bust length image - and void all allegorical elements in order to keep only essentials: the urn, reeds, scanty attire sometimes embellished with a few pearl necklaces, and the blue silk taffeta drapery with its scintillating reflections. Ladies from the most illustrious families chose to appear as a goddess of the Waters: Mademoiselle d’Ussé in 1734; Louis-Henriette de Bourbon-Conti in 1738 (signed and dated on canvas verso, New York, Metropolitan Museum of Art, inv. 56.100.2); Elisabeth de La Rochefoucauld, Duchess of Enville in 1740; Marie-François de Beauvau, Marchioness of Boufflers in about 1750 (Limoges, Museum of Fine Arts); and Madame Victoire depicted as Incarnating Water in 1751 (Sao Paulo, Museo de Arte). However less titled sitters could also assume the role, such as Marie-Henriette Berthelot de Pléneuf who came from a powerful family of financiers, painted in 1739, and Elisabeth Robinet, Madame de Flesselles, wife of a former banker who became Secretary to the King and had posed in 1747 (Princeton, University Art Museum, inv. 1964-5).

Never did a portrait exactly repeat its predecessor, even if Nattier didn’t hesitate to repeat certain gestures and details. Undoubtedly realized in the early 1740s, our painting thus shares the scanty attire sliding off her arms and the pearl necklace over her shoulders with the Portrait of the Duchess of Enville. The lively blue drapery recalls that of the Portrait of Madame Berthelot de Pléneuf. Furthermore, the extremely frontal pose, the lofty carriage of the head, and the pointed left index finger borrowed from portraits d’apparat, even if it only is indicated that water is flowing, confers a certain seriousness to the sitter which is tempered by the sweetness of the young woman’s face which is treated with a soft haziness.

As is always the case with Nattier, idealization is used sparingly and never hinders the sitter’s features from being apparent. Thus the young woman in our canvas can be recognized in another painted by the artist about a decade later according to a more conventional formula without any allegorical travesties. Conserved at the château de Cany near Fécamp, it depicts Charlotte Paulmier de La Bucaille, Marchioness de Cany.

She was born into a second-rank noble family from Normandy in 1718, the younger daughter of Pierre Paulmier, lord of La Boucaille and of Prestreval. Before dying in 1734, He married his two daughters and only children very advantageously with comfortable dowries. The elder, Geneviève, married Charles-Etienne Maignard, lord of La Vaupallière and of Hauville, Councillor in the Parliament of Normandy, and 67 years old. She subsequently remarried with Jean-Baptiste le Camus de Pontcarré, lord of Viarne, Master of Ordinary Requests at the King’s Mansion (maître des requêtes ordinare de l’Hôtel du roi).

As for Charlotte, in 1733, she married a young man born the same year as she was, Pierre-Jacques-Louis de Becdelièvre, Marquis of Quevilly. He was the only son and heir to Louis de Becdelièvre, a very rich Councillor to the Parliament of Normandy who considered himself Marquis of Cany, even though this property, acquired by his uncle in 1713, had never been raised to the level of a Marquisate. At the death of his father, Pierre-Jacques-Louis became Marquis de Cany and broke family administrative tradition so as to live nobly and closer to Court. The new status of the family was concretized by the union, on the eve of the Revolution, of the Marquis’ grand-daughters with members of the powerful ancient family of Montmorency-Luxembourg. Unfortunately, Charlotte, who had died in 1754, was no longer there to see her descendants become the Countess of Luxembourg and the Princess of Montmorency.

Apparently painted shortly after the arrival of the marquisal family in Paris, our portrait is a splendid yet discrete celebration of the family’s successful progression. It is also a perfectly balanced work of rare refinement produced by a virtuoso fervid hand. A.Z. transl. chr 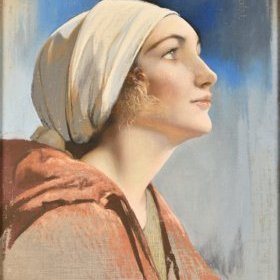 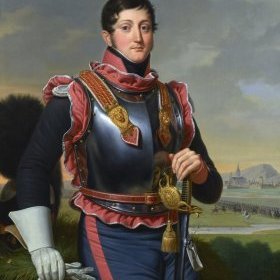 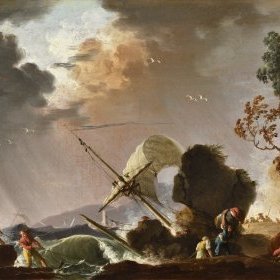 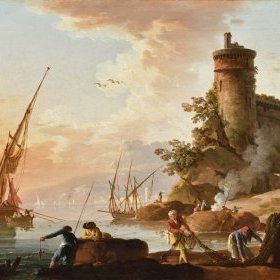