Seated Woman in Golden Silk Dress in Front of a Curtain

This drawing figured in Alfred de Rothschild’s collection (1842-1918). In the Christie’s sale of 1925, the drawing’s title is given in French with a spelling mistake, as if the auction house had recopied a mention written on an old mount or frame. Such a mention would indicate a French provenance when it entered Rothschild’s collection. The fact that the drawing was remounted and perhaps slightly trimmed complicates identifying the number inscribed in the lower left.

The young woman seated in profile in a chair with moldings characteristic of the 1750s is wearing a white silk dress with golden reflections. Both elegant and undeveloped in clothing and facial details, the picture has visible pentimenti and hesitations in the placement of the profile and right hand. These pentimenti are evident, for example, in the arm which was initially set lightly in black chalk and then redone as wished in red chalk, with the artist characteristically going back over the subject in mixed techniques.

Stump, which appeared in the 1750s, is very present, whereas the deep blacks in pastel are discreet. Work on the dress seems to have been interrupted when the whites were starting to be blended with stump to make the lighting from the left coherent. In an involuntary but characteristic concern for harmony, the form of the silk dress folds follows that of the armchair feet, a secondary motif in which the furniture is handled authoritatively.

From this observation, all of Boucher’s own technical details can be seen, and the date to which they point in the artist’s career is the 1750s which corresponds to the period when he was doing cartoons for the tapestry of The Noble Pastoral which presented elegant young women in silk dresses. At this time that he also exchanged letters with Carl Fredrik Scheffer, the Minister of Sweden in Paris, concerning the commission for the Hours of the Day depicted for Princess Louise-Ulrike of Sweden as young women conversing or going out in ball gowns. It is especially the moment when he met Jeanne Le Normant d’Etiolles, future Madame de Pompadour, the official favorite as of 1748.

Given the date, the favorite is immediately brought to mind, even more so in that the costume depicted is absolutely characteristic of her, with the “Spanish” collerette which could be seen in the 1750s in two famous sketches by Boucher, in a yellow dress and near a clavecin in the Louvre (RF 2142), and in a blue dress in front of her dressing table in Waddesdon Manor (inv. 965.1995). It is not impossible that before painting her, Boucher may have done drawings of the favorite, in order to capture the prestigious sitter’s fragile elegance. 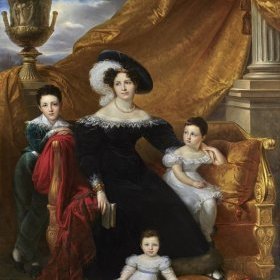 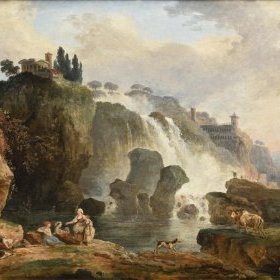