Our drawing corresponds in every way with religious depictions characteristic of Venice in the second half of the 16th century.

In Italy, the second half of the century saw the beginning of the Counter Reformation, instituted by the Council of Trent which took control of the representation of religious images in order to stand up to the Protestant Reformation. In this context, images of ecclesiastics in prayer were highly appreciated and treated by most recognized artists as a vehicle between man and Christ. Our drawing presents the Doge of Venice (probably Pius V), ecclesiastics, and soldiers who seem to be giving thanks to heaven for the victory of Lepante.1

Our composition can be compared to a drawing classified as Anonymous 16th century Italian, conserved in the Louvre (Graphic Arts Dept. inv. 10334 recto), and described in a 17th century inventory as presenting “a vision of a pope who is near a King [and] other prelates against a large number of people of war who see Our Lord between Saint Peter and Saint Paul and an armed angel in the clouds above them.”2 Although the framework of our drawing is more limited than that of the Louvre, both works seem to present the same subject. In a classical style building whose rounded arches can be observed, the Doge of Venice, surrounded by the pope and ecclesiastics in prayer are kneeling on what appears to be the steps of a church in front of a celestial cloud. While our drawing only presents the contours of the cloud, the Louvre drawing makes it possible for us to imagine the scene: Christ surrounded by Saints Peter and Paul. The group on the ground is followed by about ten soldiers brandishing standards celebrating the naval victory.

The rapid pen sketch embellished with brown wash makes our drawing a spontaneous work. Apparently preparatory for a final oeuvre, our drawing probably let the artist note his first ideas by reducing the composition to its essential elements. By thus encircling the figures, he gives more force to the pious image at the center of our composition, which is filled with a profusion of more soldiers in the Louvre version. In the background, the space in the architectural opening on to outside can already be found in compositions by Venetian artists in the first half of the century which almost systematically present the Doge of Venice. The opening makes it possible to air the composition by giving it more breadth while keeping our attention on the main scene.

Characteristic of the years 1570-1575, our drawing can be considered a symbol of the religious piety of its patron. Through the clarity of its compositions, the Catholic Church seeks to incite the internalization and reliving of the Christian message by means of the image, a legible visual support to convince the faithful through emotions.

1The naval battle of Lepante, on the Eastern Greek coast, was fought between the Ottoman ships and the Christian flotilla which was mainly composed of Venetian and Spanish squadrons assembled through the initiative of Pope Pius V (1566- 1572) under the name of the “Holy League.” 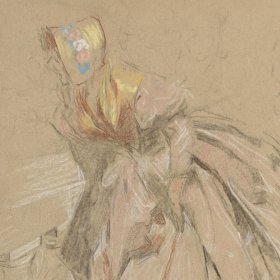 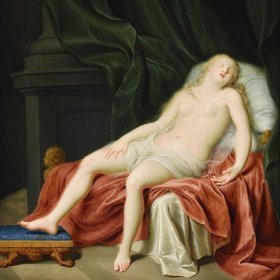