Portrait of a Young Red-Headed Woman

The artist’s collection, private mansion of Albert Besnard, Paris, until 1942.

Albert Besnard’s fame in his time has no parallel other than the relative oblivion to which his name would fall soon after his death. Not until 2008 and the exhibition at the Eugene Boudin Museum in Honfleur initiated by Chantal Beauvalot and the Association “Le Temps d’Albert Besnard” (“Albert Besnard’s Epoch”) would the public rediscover this contemporary of Cézanne and Monet, along with the originality of his style. The surprise was complete and thus made it even more necessary to hold a large Parisian retrospective. This will take place in 2016 at the Petit Palais whose entrance cupola is decorated with four large panels evoking the complexity of artistic creation: Thought, Matter, Formal Beauty, and Mysticism painted by Besnard between 1906 and 1910.

Prix de Rome, Gold Medalist at the 1900 World’s Fair, Director of the French Academy in Rome and the Ecole des Beaux-Arts, member of the French Academy and the Academy of Fine Arts, Legion of Honor Grand Cross, state funeral: Albert Besnard received all the honors that the Third Republic could offer an artist. Nonetheless, despite his official success, his official state commissions, his acclaimed participation in the Salons, the painter remained independent midst the artistic movements of his time. Through the instruction of Jean Bremond, a student of Ingres, he was certainly committed to the tradition of a constructed signifying art, but his vitality and sense of color brought him closer to the Post Impressionists. Eclectic and synthetic, he drew inspiration from the Old Masters, even while conserving a strong sincere character which was immediately identifiable. While the subjects of his grand interior decorations resonate with Symbolism, his easel paintings, pastels, and etchings remain essentially realist tinged with the poetry and uneasiness characteristic of the turn of the 20th century.

Women are at the heart of Albert Besnard’s œuvre. Radiating the beauty so special to the period around 1900 with generous throat largely bared, skin immaculate, and long hair held tightly in a voluminous chignon, they incarnate life and love, as well as color and light, in the painter’s imagination. Voluptuous henna-tinted hair (in keeping with the fashion for red locks), crimson lips, black eyes, and ivory skin with thousands of iridescent reflections and shifting shadows: each of Besnard’s female images serves as pretext for luminist exploration, an ode to color enflaming the Rubensian flesh of his models, especially when freed of the encumberment of clothing and the corset’s clutch.

For the artist enjoyed painting nudes, whether they were in compositions which recalled mythological themes from the former French School, such as Sleeping Nymph in the Museum of Nantes or in spontaneous studies which had no other purpose but the celebration of the female body in the mode of Blonde Woman in Profile conserved at ARoS Aarhus Kunstmuseum in Denmark. Besnard modeled the forms of these anonymous figures with vigorous realist sensuality without abstract idealization or rigorous description. Instead of the affected gestures and lascivious undulations of Art Nouveau artists, he preferred simple banal poses, often seen from behind, as if, unconscious of their beauty, these women sought to preserve their modesty in terms of the spectator.

Thus our painting is a portrait full of the grace of an unknown young woman placed very simply with her head in profile and the back of her shoulders seen in three quarter view illuminated by the type of high overhead lighting the painter preferred. The sitter’s flame-colored hair is lifted in an early 20th century style, but her clothing is reduced to ochre drapery sliding off her milky white shoulders. Relying on solid drawing which fixes the outlines of her pointed nose and the suave line of neck and shoulders, Besnard’s brush skims the canvas rapidly and accurately. His fluid brushstrokes spread, are superimposed one over another, intersect, and zigzag as they shape volumes with precision and the distinctive insistence characteristic of Besnard’s works at the beginning of the century. The orange, brownish, yellow, and madder tonalities come together as if in a musical score: however many strokes of pure color produce as many accents, so the areas between paint-loaded passages and those where cream-colored lower layers shine through act as nuances.

Everything in this painting supports a statement by Camille Mauclair who devoted an entire chapter of her 1914 monograph to this « considerable series of dazzling, tender, sensual nudes:” She writes,

“His nudes are full of life and truth. However what magnifies and lifts them into lyricism is the light which plays across their volumes. Through this singular magic, he transforms them into bouquets of tonalities which illuminate an interior. M. Besnard’s nudes are chromatic poems to feminine glory.”

We would like to thank Mme Chantal Beauvalot for having confirmed the attribution of our work. 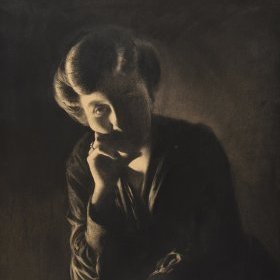 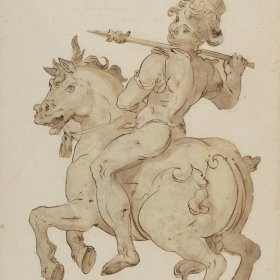