View of a Park with the Pool of a Fountain 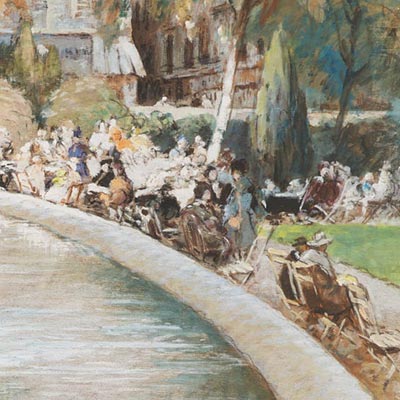 A student of Rochegrosse at the Ecole des Beaux-arts in Paris, Fred Money is aligned with an Impressionism in which park and fair scenes, as well as landscapes from different French regions, took life under a fresh iridescent palette bathed in light. Fred Money, who participated regularly in the Salon des Artistes Français, was also appreciated for his illustrations. At the request of the SNCF, the French train company, he produced a series of posters on the theme of beaches along the Atlantic Coast. His drawings embellished the luxury editions of Anatole France, Pierre Loüys, and Alexander Dumas, whose entire oeuvre he illustrated.

Views of public gardens punctuate the work of a painter who enjoyed setting his easel in lively public places, such as the Monceau Park or the Batignolles Fair. He pauses here in a public park along the edge of a fountain. The painter has chosen an original composition and thus gives a lot of room to the pool which takes up the foreground and splits the picture along a sinuous diagonal. The artist adroitly masters the fine art of reflections. The painting’s horizon is closed by street apartment buildings, but the sky has its place in the fountain basin. Along the edge of the pool, a lively crowd seated on folding chairs relaxes, converses, and observes neighbors. Rowers, with their light costumes and long dresses, evoke the period between the two wars.

Accustomed to mixing media, Fred Money uses gouache, watercolor, and pastel together here, a fact which gives the scene a velvety mellow effect. The light, which is still warm, diffuses the first autumn lights on the trees which are already assuming yellow and fauve tints.

Our work can be compared with the pastel At the Park (pastel on cardboard, 73 x 104 cm., Blanchet & Associés Sale, June 22nd, 2012, lot 59), a view of a joyous crowd alongside an ornamental lake. The construction of our View of a Park with the Pool of a Fountain is also close to the Lively Alley (watercolor and gouache on paper, 23 x 32 cm., Pillon Sale, November7th, 2004, lot 171), composed of a large diagonal swathe of nature in the foreground, and then a string of people along the curve of the lawn. M.B.