The Coal Waggon (Recto)
Two Fishermen in a Landscape (Verso)

In 1868, Clement added to the end of his entry: “M. His de La Salle owns a beautiful study for this piece.” This drawing subsequently figured in this famous collector’s sale (Christie’s, London, November 27th, 1880, lot 50.)

In the opinion of specialists of Gericault and of the History of Lithography, the 1821 series is a veritable masterpiece. Never, since the technique was invented in 1796, had an artist attained such perfect mastery of it. Among the lithographs can be found The Coal Wagon, whose theme, with just cause it was said, “was a real leitmotif of the English period.” Along with a number of his contemporaries who went to England after the long period of Napoleonic blocades, Theodore Gericault was totally fascinated with coal and its means of transport. This primary substance was totally unknown in Paris at the time (one still heated only with wood) as it didn’t enter the country until 1828. It seems that the foreign voyager who arrived in London for the first time couldn’t escape the problems already posed by the intense utilization of coal, a perfect symbol of the English industrial revolution, its economic activity and energy.

Thus the importance of the coal cart theme and the reason for its presence in such beautiful watercolors and lithographs in Gericault’s English œuvre becomes evident. Like Charon’s skiff, the cart symbolized the passage from one world to another (from agrarian to industrial) while stigmatizing the famous “class inequalities” of English life, whose tragic and inevitable consequences would so deeply strike French liberals of the 1820’s.

Our unpublished watercolor is thus a real rediscovery whose position in relation to the 1821 lithography and the 1822 French reprint is crucial to define. Aside from the study from the His de La Salle collection which is probably confused with the drawing conserved in a private collection, two other watercolors exist in the Wadsworth Atheneum in Hartford and in the Bonnat Museum in Bayonne, the latter being signed and dated 1820. This last date is of major significance as it confirms our hypothesis, that is to say, that the subjects realized in London in February 1821 had already been worked on a few months earlier in London itself, and maybe even again in Paris in anticipation of the next sojourn in England. We know from Clement, in fact, that Gericault’s lithographies were often made “after oil paintings or watercolors.” In other words, they absolutely were not drawn and improvised directly on stone, but were the product of long preparatory labor.

In our watercolor, the signature appears to be totally autograph, homogenous, and coherent with the general effect of the drawing’s graphic touch. The signature is to be found on the left, whereas in the Bayonne and Hartford watercolors, it is on the right. If it seems less assiduously worked, that may be the proof that it was made immediately upon completion of the drawing. Comparison between the Bayonne watercolor and ours is spectacular: although larger, the one in Bayonne seems less monumental, not as strong, and less sculptural. This effect is due to the framing of the scene and the difference in technique as well, because the latter uses grey ink wash. The two works are thus radically different. In the context of his serial and chromatic experimentation, Gericault’s desire to test the two approaches can be better understood. As for the Hartford watercolor, it shares an obvious fraternity with the one in Bayonne: one seems to be the emanation of the other. Evidence suggests that Gericault resorted to tracing. The Hartford watercolor, with its rounder, less angular rocks (in the left and center foreground), could be the first version and that of Bayonne the second. The latter served as a prototype for the lithograph which might explain the signature followed by the year.

The choice of only brown wash in our watercolor merits attention. Gericault, in fact, did not wish to highlight it with white gouache (an exercise in which he excelled), but preferred to use, with a masterly hand, the cream colored paper in reserve to indicate sparkling light on the flat rocks in the foreground and on the coat of the first horse. The use of this reserve made it possible also to do the two little white sails in the left background, and even more so, the complex construction of the magnificently vibrant clouds. Thanks to the subtle association of wash with the white reserve of the paper, Gericault succeeded in suggesting the aqueous consistency of the tormented sky. The latter, which takes up much more space than in the two lithographs, was the subject of special attention by Gericault and participates actively in the psychological climate of the scene. Here, Charles Robert Cockerell’s remarks make complete sense: “Gericault often said that England was the best place that he knew for studying the air.” The lightness of the clouds and the suggestion of a wind serve, in contrast, to emphasize and reinforce the weight of the cart, the coal sacks, as well as the muscular massiveness of the horses.

Other details have been worked even more, as for example, in the middle ground on the left, the very discernible mast of the sailboat behind the rail, or, further back, the distant mountains. The modification of the faces is more spectacular. Calm and concentrated in the Hartford and Bayonne watercolors, here the face of the central figure is severe, almost sinister, as if Gericault wanted to signify his condition as a coarse proletarian (curiously, in the 1822 lithography, this face expresses the opposite, a certain simple good heartedness.)

The combination of these differences leads us to believe that our watercolor is the product of formal reflection coming out of mainly the Hartford and Bayonne preparatory watercolors, and that it was preparatory to the English lithograph and the painted version, thus dating to 1820-1821. It would seem that were it magnificently sculptural, with reinforced shadows and lights, the sheet would more likely date to 1821 -1822, when Gericault was working on the French Series and not satisfied with the overly diffused light of the English plates.

Furthermore, the manner of drawing horse anatomy seems absolutely characteristic of Gericault’s art and manner both during and following his English period. Likewise Gericault seems to have explored a somewhat unprecedented manner of drawing in brown wash so as to rival lithographic stone with its suave, realistic, and precise rendering. The superb watercolor of the Plasterer’s Horse, signed and dated 1821, is a perfect example of this attempt. Evidently, our watercolor belongs to this little known manner which has hardly been studied by the artist’s specialists.

As for the verso of our watercolor, it is still difficult to identify. Is it a landscape copied after an Old Master? In any case, the same magisterial manner can be found of using the paper in reserve to create on the one hand, two figures with their spears and large hats, and on the other, leaves, rocks, and waterway which seems to end in a waterfall in the foreground. Indeed, butteri or shepherds camped in an Italian landscape come easily to mind. 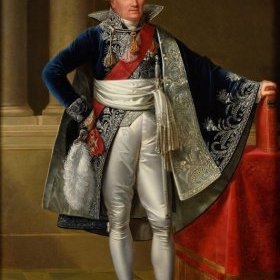