At the turn of the 20th century, before devoting himself almost exclusively to pastels, Firmin Baes enjoyed using fusain and black chalk, sometimes heightened by watercolor. Often in large formats, his cleanly finished drawings were of landscapes, such as After the Storm, dated 1904 (watercolor and fusain, 79 x 108 cm. private collection), female nudes, town or country scenes, as well as portraits. Before the success which his pastel portraits would have with Belgian high society, Baes’ sitters mainly were from his family and close entourage. Thus, these works are less known by the public because they have generally remained among his descendants, such as the fusain depicting his uncle, The Architect Jean Baes from 1896 (dimensions and current location unknown), the double portrait of the artist’s sisters Alice and Irma at the piano which is entitled The Duet, or even that of his first daughter, Suzanne at One Year Old (1904, fusain, 48 x 35 cm. private collection).

Conserved by the Baes family, the portrait which we present shows Maria Nélis, the twenty-three year old young woman whom the artist met through his sisters and whom he wed in April 1902, some five months after the date of our drawing. It seems to have been a gift made at the time of their engagement. Maria played an important role in her husband’s career by managing the couple’s practical and financial questions. She also was a frequent sitter for Firmin Baes.

Her head resting on her right hand, the left index finger caught between the pages of a book, the young woman is meditative, as if she has just been interrupted in her reading. Her gaze is fixed on the portraitist who lovingly captures the instant. Illuminated by a low weak light, undoubtedly that of a lamp, Maria’s face is sculpted by stumped shadows and the paper in reserve brings her features out of the shadows. We can only admire the delicacy and accuracy of the chiaroscuro which is close to photographic realism.

Our portrait confirms the opinion of an art critic concerning the art of the young Firmin Baes who began to exhibit his oil paintings and large drawings regularly: "thought and soul are the greatest motors of art production and a very skilled hand will never replace emotion, Firmin Baes’ drawings prove yet again that one lives, breathes, and suffers in front of these fusains, they are fixed impressions and feelings.” 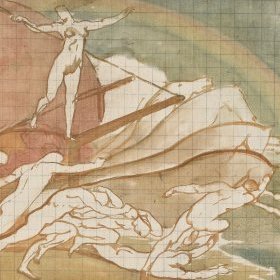