The war in which France opposed the Prussian alliance between August 1870 and January 1871 profoundly affected the French people ravaged by the harshness of combat and humiliated by the conditions of defeat. The conflict remained lastingly present in the works of writers, painters, and sculptors, through works celebrating sacrificed heroes or exalting national sentiment, in the manner of the Siege of Paris (Orsay Museum, c. 1884, oil on canvas) by Ernest Meissonier, or Hope (Orsay Museum, 1871-1872, oil on canvas) by Pierre Puvis de Chavannes. Enlisted in the National Guard, James Tissot was among the artists who actively participated in combat and extracted subject matter for their art. Arriving in Paris in 1856 to study painting at the Ecole des Beaux-Arts, Jacques-Joseph Tissot – who then took the name James – was trained under the direction of Hippolyte Flandrin and Louis Lamothe. He exhibited in the Salon by 1859 and at the Royal Academy of London starting in 1864. In 1870, Tissot fought at the front which neared Malmaison-La Jonchère. It was during this period that he became friends with Thomas Gibson Bowles, the correspondent in France for the London Morning Post. Because of his engagement in the Commune, or perhaps in a desire to find a more profitable market, Tissot left Paris for London in 1871. There, the painter published a series of illustrations on the Franco-Prussian War in Bowles’ work, Defence of Paris. Narrated as it was seen. Between 1875 and 1878, the artist also printed a series of etchings after drawings, watercolors, and oil paintings he had executed during the war. Gathered together under the title, Souvenir du siege de Paris, they bore evocative titles, such as Le premier homme tué que j’ai vu (The first killed man whom that I saw). Tissot enjoyed depicting what happened behind the scenes of the Franco-Prussian combat, especially ambulances. Many Parisian public buildings had been requisitioned to welcome the wounded soldiers, as is recalled in the etching Le foyer de la Comédie française pendant le siege de Paris (The Lobby of the Comédie française during the Siege of Paris). Judging by the elegant décor of gilt carved wood paneling, perhaps the Comédie Française is where Tissot painted our wounded soldier. Sluggish on his cot, his arm restrained in a scarf, the young soldier’s still seductive face, with youthfully rounded cheeks, feverish complexion, half smile and vague gaze, underlines the harsh consequences of war. Son of a textile merchant and a milliner, Tissot attached great importance to fabrics and costumes – posterity would remember him as the painter of society life and pretty outfits. Here the artist reveals his mastery of watercolors : the soldier’s uniform and grand creased leather boots are drawn in a nuanced palette of blacks heightened by gold and red. The composition is skillfully constructed ; in harmonious subdued tones, the wood paneling in the background, the bed cover and the soldier’s coat define a fitting setting for this informal portrait. After the death of his mistress and his return to France in 1882, James Tissot, transformed by a mystic experience, devoted the rest of his career to the production of religious paintings, and illustrated the Bible with several hundred watercolors. The painter ended his life isolated from the world in his château of Buillon, a residence in the Jura which he had inherited from his father. Our watercolor, which had remained in his possession, was kept at Buillon by his descendants until the dispersion of the family collections in 1964. 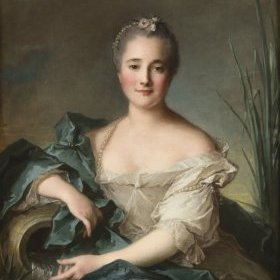 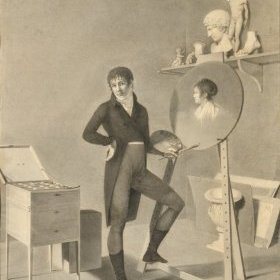